I not only made the hood with a crocodile stitch pattern, but also Crocodile Stitch Boots as house shoes.  For all of you who find the notion weird, you might want to read up on it here.  My mother recently also told me, why one might find them useful.  Which is something I’ve never understood, besides the fact that they are like very warm socks to wear at home.  Anyway, apparently the German notion of wearing house shoes means, that you don’t bring the dirt you collect while walking through your flat (dust and such) on your couch when you go relaxing.  Or to your bed for that matter.  Well, I just tend to swipe my feed before I do it and sweep my flat fairly regularly.

Anyway, here are the ones that came out with it.  I used Creative Worsted Yarn by Rowan.  The Dragon Scale Buttons were the idea of the future wearer.  Note that this photos were taken while I was wearing the shoes, which are a little too large for me.  I’ve enhanced the pattern by sewing leather soles under the finished shoe, so they are also good for going out on the balcony, but only if it’s dry outside. 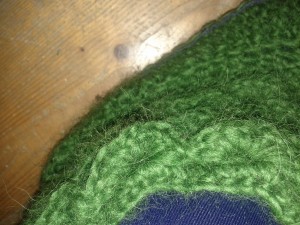 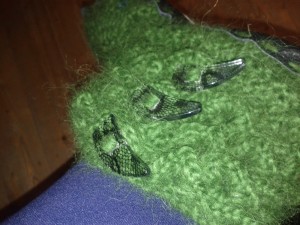